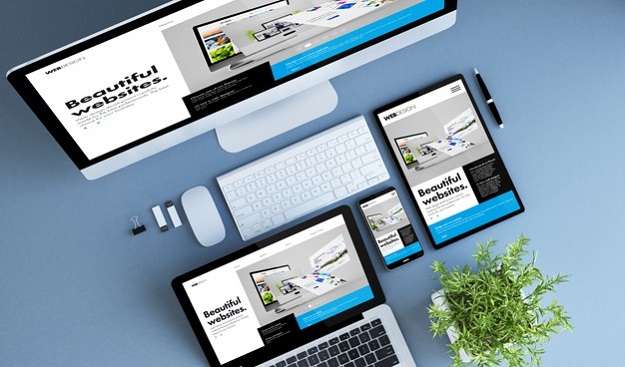 Since websites started competing for the attention of internet users, website design has been important. A properly designed website can capture the attention of the readers, it is easier to read and will present the content in an organized and clear way. The views on what helps designers accomplish that have changed as technology changes and the designers accumulate more experience. The earliest webpages came into being in the year 1991 and the designers did not pay attention to the layout. The pages consisted of articles that researchers wrote for the other researchers and the links and content were the only important things.

As people learned more about the World Wide Web, in the mid-1990s, the appearance of websites became important. People who created websites were mainly computer geeks and they had interest in experimenting in the new technology – they were not interested in aesthetics. Images became useful and people started using tables and lists to organize information. Even though JavaScript was available, most people saw it as a toy and not a website designing tool.

In the last half of the 90s, commercial websites came into being and the appearance of a website became a serious concern. The designers started focusing more on the appeal and readability. The commercial websites would display animations for serious purposes. Initially, GIF images were the only option, but after Adobe Flash came into being, people were able to use various effects on their sites. Designers started building websites on Flash entirely and on the server side, CGI and PHP dynamic pages were becoming popular. That made the design work more undisciplined because the developers had many tools to use.

By the time we were entering the 21st Century, website developers had come up with new ideas. The creation of website pages involved more than technical knowledge – visual design experts already existed. CSS2 came into being in early 1998 and allowed the principle of content and appearance. The page designers had more control over the appearance and placement of elements.
As more and more people with website design skills dived into the industry, they realized that many materials in a single page ad a lot of plain text in unbroken blocks was a huge burden on the readers. They started splitting websites into pages and including tables and menus to allow easier navigation. Landing pages were now more important and played the role of directing the visitors to the other pages. Bright colors and blinking text gave rise to the subdued designs.
The increase of fast processors, high-speed internet connections and monitors that had more pixels opened more opportunities for the website designers. Animations and high-resolution graphics were now popular. Designers started focusing more on sidebars and multi-column layouts to take advantage of the large screens. In that age, the phrase “Web 2.0” was very common and it referred to the website pages with customized and interactive features.

In the early 2000s, the designers were using CSS2 and HTML4. The popularity of CSS allowed the designers to separate content from other design elements easily. The website and content developers had more freedom and they could rely on design solely when creating the content. At the time, designers had a better understanding of the colors and the color theories and therefore the whitespace was common with the minimalistic designs.
In addition to the links they attached to text, website creators started linking images and icons too. The resolution and scaling were a better choice when it came to image placement and image pixelation. Websites of that time were more functional and had a better appearance compared to the previous ones. The internet speed had increased and a page would take lesser time to load. With an increase in speed, some trends like dark backgrounds, gradients, and smaller text became general visual elements.
In the mid-2000s, the webpages were more like the modern day webpages. The web developers were integrating interactive media and multimedia content paralleled with social media growth. Color distribution, typography, and icons defined the aesthetic changes, which were prevalent in the web development period. Most social media websites like Myspace and Facebook came into being in the year 2003 and they relied on Flash integration to display the animations.
When creating a website, designers had to think about the navigation and easier readability, the average consumer monitors had a resolution of 1024×768 and would display over 17million colors. With the achievement, YouTube advised content creators to start making videos for both education and entertainment purposes. Content-based video presentations were now real.

In the year 2007, after the releasing of the iPhone, a website design revolution came. The impact was not evident at first, but the smartphone changed both the design and access of websites. Steve Job’s declaration that the iPhone would not support Flash had the biggest impact. At that time, Adobe’s software started showing its age but presented numerous problems. Moreover, it was only a proprietary plugin and not a W3C standard. Many other technologies cropped up too.
Still, in the mid-2000s, the importance of search engines rapidly increased and they could not access Flash content. “Search engine optimization”, a phrase that is very common on the World Wide Web, did not exist but website developers were looking for ways to make their websites visible to the search engines. At the same time, some designers were using HTML to create more types of content, a fact that reduced the use of Flash. Today, Flash has gone obsolete.
The JavaScript technique, Ajax, that allows the updating of webpages while still in place allowed responsiveness of websites. Developers started relying on the response of the website users to make minor changes on their websites – there was no need for reloading the entire page anymore. Website applications were now meaningful.

Since the year 2010, mobile devices like smartphones and tablets have grown in popularity and now account for over 80 percent of the devices people use to access the internet. In other words, websites have to work properly in both the large and small screens. For a while, website designers had to create two website versions, one for the mobile devices and the other for desktop computers. That gave them more headaches when it came to the maintenance part and people who received links would find themselves on a website that would not work well on their device. The problem led to the development of responsive website design, which designers saw as the right solution.

Skeuomorphism has led the design concept. Calm color schemes, multi-dimensional scripts, and natural textures became common and the developers would work down to the pixel to ensure that an image would resemble the original. They were using textures, lighting and shadows and minimalism attracted more attention because it allowed processing of more ideas and content from a single website. Today, flat design is the standard. In 2014, Google released a style guide with the aim of returning the realistic design styles.

With responsive website designs, a single page would appear on most devices in various formats because the browsers used CSS and JavaScript to configure the website for the hardware that is running on. Introduction of CSS3 and HTML5 helped in the effort by introducing another important principle, which is the separation of Document Object Model (DOM) from the website content and its appearance. The ability to handle DOM separately helped developers create webpage designs that can work with any content and personalize the appearance when necessary.
By the year 2018, the users and the mobile browsers were the focal points of web design. Webpages displayed fewer design elements and the defining elements included sounds, polygons, contrast, patterns, and realistic images. Designers also focused on developing websites with multiple interactive layers. To get more traffic, a website should be easier to access and more convenient.
Today, websites are important marketing tools for successful businesses. Actually, a website design along with high-quality content has become crucial in search engine optimization. Minimalism is the norm and some websites are using backgrounds made up of a single large image and 2D images. The website design is revolving around the viewers and designers work hard to make pages accessible and pleasing.

It is hard to say what people should expect in the future. What we can do is to analyze the last twenty years of website design to identify the trends that happened and what caused them. In the near future, you might witness faster and easier forms, more dimensions and animation. GIFs are also likely to occur on the first pages of most websites in addition to the return of menus and minimalism.

Web developers are now working hard to close the gap between the back ends and front ends. Most websites run on JavaScript on servers and the browser with closer interaction between the two ends. The difference between mobile application and a website has blurred and web users can choose to work offline or access the server when an internet connection is available.
We are likely to see new applications or languages that will introduce more possibilities that we thought that they were impossible. If you had asked the person who created the first webpage, how the webpages of 2018 would look like, possibly, you would not have gotten an answer. It would be hard to imagine because the tools to create the possibilities were inexistent.

Plumber Marketing 101: The Ultimate Guide To Marketing Your Plumbing Company In 2021 & Beyond

Get More Qualified Roofing Leads with These Proven Strategies